The Society’s February talk on Stockwell Street held at the University of Greenwich was well attended and turned out to be different to the one advertised in January’s newsletter. Duncan Hawkins, the lead archaeologist from CgMs Consulting was the guest speaker and presented a slide show of last summer’s excavations. The £85,000 project commissioned by the University, involved 15 expert archaeologists who stripped off layers of earth, excavating as far as two metres below the current ground level, to reveal hidden patterns of early fields and ditches dating back to the 14th century, when Greenwich was little more than a remote settlement, with a church and manor house set amid rolling farmland.

The main part of the dig focused on an 18th century former malt house, which once supplied malted barley to local inns for use in brewing. At that time, Greenwich’s many pubs and inns each made their own beer, selling to both adults and children, as water was not safe to drink.
We were shown pictures of the excavations as well as the existing buildings prior to their demolition. These have been photographed and recorded for future generations. As Duncan said: “Today, archaeology is not just about digging below the ground, it is about recording what is above.” It was nice to see an older image of the former petrol station’s forecourt, now in the site’s archive.
The second part of the talk was about the former King’s Yard in Deptford, (Convoys Wharf) where Duncan is currently working. Deptford was including as the finds mentioned in the newsletter were unavailable for us to view.  Details of the finds can be found at: - 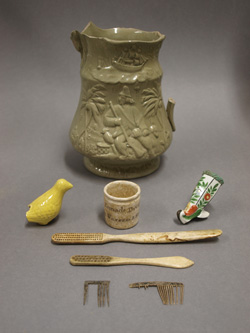